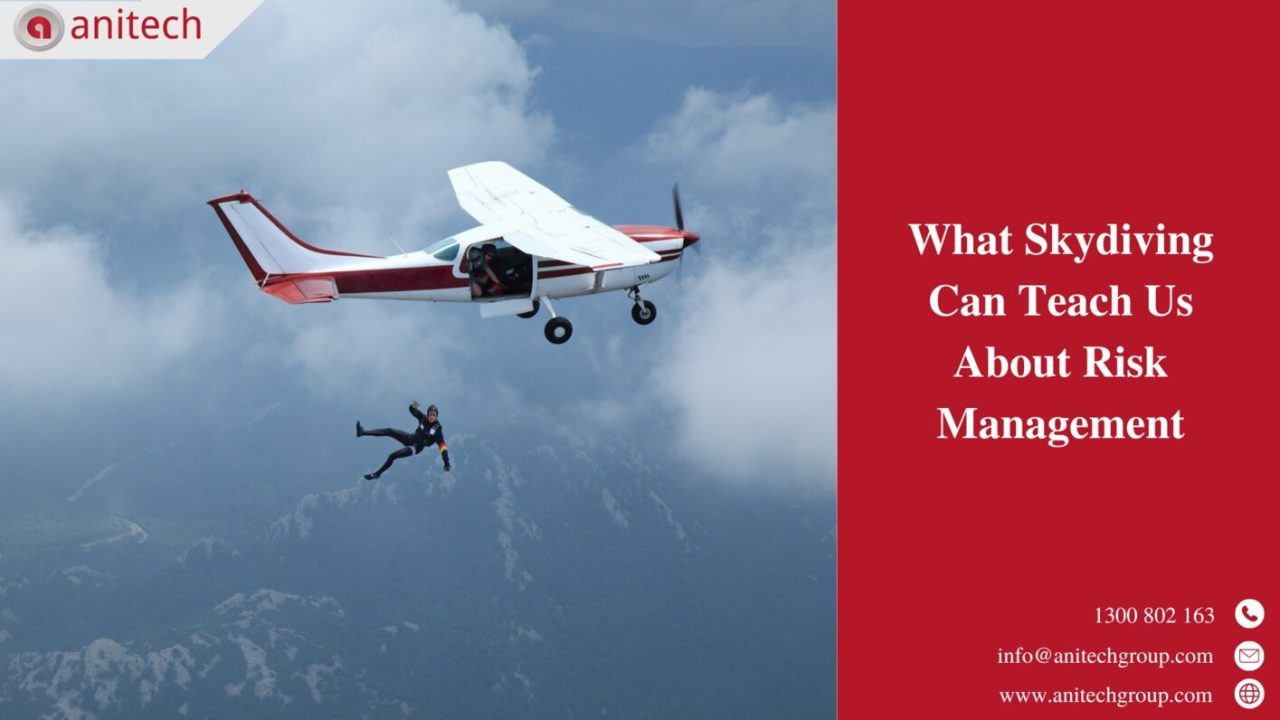 During my late teens, I decided to follow my dream of becoming a skydiver. The image above is the last known image of my skydiving adventures – 14,000 ft above sea level.

While this dream has since faded into the distance…the lessons I learnt during my 40 solo skydives still stay with me.

Skydivers are often thought of as risk-takers who live off of cheating death. However, I came to the realisation that this is far from the case.

The skydivers I encountered were the most risk-averse people I had ever met. Even within a culture which leans heavy on the ego side, the protocols for a safe jump are embedded from day one.

So other than having a whole lot of fun, here are 3 lessons I took away from my experience along with some comparable workplace examples:

Lesson 1: Incidents are generally due to a combination of factors

If you have ever watched or read “Lessons from Longford”, you may recall Professor Andrew Hopkins emphasising how a “combination of factors” led to the explosion at the Longford gas plant. When conducting a root cause analysis, keep in mind that there is often more than a single root cause.

This is also recognised by skydivers. I have illustrated this with a Swiss cheese model using hypothetical scenarios: In the example above, a series of failures lined up to result in an incident….not a single root cause. While each barrier provides a mechanism of defence, do not let complacency or inadequate hazard identification result in the big picture being missed. This is why relying on a single control will lead to weaknesses within your Risk Management System.

In the example above, a series of failures lined up to result in an incident….not a single root cause. While each barrier provides a mechanism of defence, do not let complacency or inadequate hazard identification result in the big picture being missed. This is why relying on a single control will lead to weaknesses within your Risk Management System.

Lesson 2: The phenomenon of “target fixation”

Imagine being 8,000 feet in the air. With nothing but the breeze in your face and the flapping of your parachute in the wind as you glide slowly towards the ground. Below your feet, you can see acre upon acre of empty fields. The only thing separating this patchwork of safe landing space is a narrow barbed wire fence which is easily observable and avoidable. So, why can’t I avoid it?!?!

This exact scenario happened to me and is known as “target fixation”. Essentially, it is the act of trying to avoid a hazard which can cause you to head straight towards it (as you may have guessed, I had a not-so-graceful landing into the fence).

Now for a workplace example. Imagine a factory worker picking powder-coated window frames off of a conveyor line. The factory worker has done this many times before and rarely drops a frame. One day a camera crew comes in to make a marketing video and would like to film the process. The factory worker tells himself “better not drop anything!”

The red light on the camera goes on, and the worker picks the frame from the conveyor and *bang….the frame is dropped and damaged. Woops, better do a second take. Once more, the red light goes on, *bang…another frame damaged. After a few more failed attempts, the crew decides that they have enough footage to edit out the stuff ups. Unfortunately like landing in the barbed wire fence, this example also involved yours truly.

In both of these cases, my awareness alone was not enough.

Lesson 3: Safety culture is the absolute backbone of skydiving operations

The attitudes and behaviours of more experienced skydivers would be subconsciously imprinted upon newbies like myself. Their teachings, experiences, mistakes and words of caution stuck like glue. This is why I was able to pack my own parachute, jump out of a plane and land on the ground safely (most times….the fence being the exception).

This couldn’t be any more true in a workplace setting. Newcomers and less experienced employees will pick up the social norms from those who have perceived authority or experience.

This is described by author John Bernard Taylor as follows – “Within a social group, individuals usually maintain their group membership by sharing common beliefs and aligning with the behavioural norms.” (Safety Culture: Assessing and Changing the Behaviour of Organisations. 2010).

With this in mind, when did you last benchmark the safety culture of your workplace?

Remember – If you do not foster a strong culture of safety, you may be undermining your entire Risk Management System.

previous
5 Reasons to attend Anitech’s upcoming Webinar on ‘Changes to ISO 27001: 2022’
next
Securing Systems Before Going on a Holiday